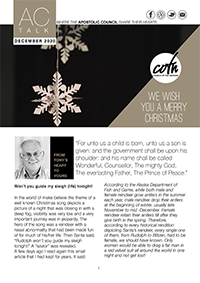 WE WISH YOU A MERRY CHRISTMAS

“For unto us a child is born, unto us a son is given: and the government shall be upon his shoulder: and his name shall be called Wonderful, Counsellor, The mighty God, The everlasting Father, The Prince of Peace.”

In the world of make believe the theme of a well known Christmas song depicts a picture of a night that was closing in with a deep fog, visibility was very low and a very important journey was in jeopardy. The hero of the song was a reindeer with a nasal abnormality that had been made fun of for much of his/her life. Then Santa said, “Rudolph won’t you guide my sleigh tonight!” A “savior” was revealed. A few days ago I read again this small article that I had kept for years.

According to the Alaska Department of Fish and Game, while both male and female reindeer grow antlers in the summer each year, male reindeer drop their antlers at the beginning of winter, usually late November to mid -December. Female reindeer retain their antlers till after they give birth in the spring. Therefore, according to every historical rendition depicting Santa’s reindeer, every single one of them, from Rudolph to Blitzen, had to be female, we should have known. Only women would be able to drag a fat man in a red velvet suit all around the world in one night and not get lost!

Download Below to read the full AC Talk from Tony Fitzgerald!