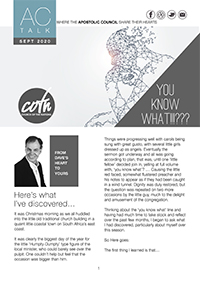 It was Christmas morning as we all huddled into the little old traditional church building in a quaint little coastal town on South Africa’s east coast.

It was clearly the biggest day of the year for the little ‘Humpty-Dumpty’ type figure of the local minister, who could barely see over the pulpit. One couldn’t help but feel that the occasion was bigger than him.

Things were progressing well with carols being sung with great gusto, with several little girls dressed up as angels. Eventually the sermon got underway and all was going according to plan, that was, until one ‘little fellow’ decided join in, yelling at full volume with, ‘you know what’? .... Causing the little red faced, somewhat flustered preacher and his notes to appear as if they had been caught in a wind tunnel. Dignity was duly restored, but the question was repeated on two more occasions by the little guy, much to the delight and amusement of the congregation.

Thinking about the ‘you know what’ line and having had much time to take stock and reflect over the past few months, I began to ask what I had discovered, particularly about myself over this season.

The first thing I learned is that....

Download Below to read the full AC Talk from Dave Cape!