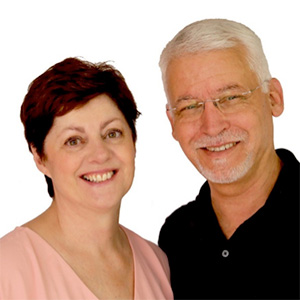 Marius had a powerful encounter with God in 1975 which led to his salvation and call to the ministry.  Linda met Marius in 1976 at a gathering for young people and soon after that she committed her life to Jesus Christ. They married in 1978 and are the proud and blessed parents of four married  daughters, their spouses and has nine grandchildren.

During 1987 the Gradwell family moved to Mthatha in the Eastern Cape, South Africa where they pioneered their first local Church. The ten years that followed not only dealt with their stereotyped mind-set and deep-rooted racial prejudice; but it was also during this time that a burden to see the injustices of the past addressed was birthed in them.

In 1997 they moved to East London where they joined Christian Centre, Abbotsford where they served for 24 years. They have been involved in planting various churches during this time. This led to the formation of a family of churches known as Heartbeat Ministries International.

Marius and Linda have retired from full-time pastoral ministry of more than three decades. The focus and passion of their ministry is to help grow healthy families and healthy churches.

In 2014 Louis and Edna Els embraced Heartbeat as a sub-cluster to their Freedom Hill Cluster and in so doing Heartbeat became part of the Church of the Nations family.

Heartbeat’s goal is to assist and help churches and ministries to become more effective in advancing God’s Kingdom.