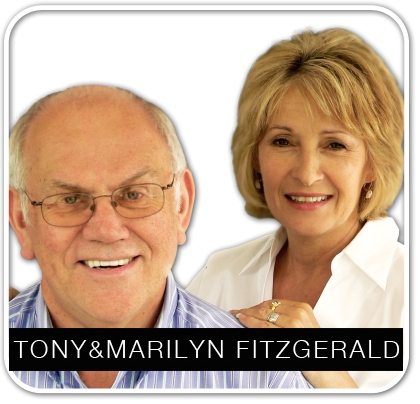 Tony was born and raised in Tasmania, Australia, where he originally prepared for a career in accountancy and finance. After marrying his childhood sweetheart in 1970, Tony and Marilyn began their ministry life together in the Salvation Army College for Officers. During the “Jesus People” movement of the early 70s they became involved in street ministry, working with young people in a non-denominational setting.

When miracles and healings began to follow Tony's preaching, doors opened around the world resulting in a move to the UK in the mid-70s where the Fitzgeralds worked with the leadership team of a well known youth mission organization.

In 1979, Tony and a team of like-minded leaders began planting local churches which soon multiplied to other nations. Ten years later these churches and ministries came together under the name, “Church of the Nations.”

Today, COTN is made up of several apostolic-led “clusters” or groupings of related church families. Together, these Clusters—served by COTN's Apostolic Council—are now advancing the Kingdom in more than 50 nations around the world.

Tony’s desire is to see the Church return to a lifestyle of values-based Christianity, simplifying its wineskins to nurture believers in healthy father/son mentoring relationships which help establish the Kingdom of Heaven on earth.

He and his wife Marilyn travel approximately 70% of the year, ministering within COTN as well as at conferences, apostolic gatherings and other church gatherings across the wider Body of Christ.Tony’s ministry inspires people to experience the depth and power of The Holy Spirit, and to better grasp the great love pouring out from the Father heart of God.

The Fitzgeralds currently live in Richmond, Virginia, the base from which Tony serves the Makarios Cluster* of COTN-related churches in the USA and beyond. He and Marilyn are blessed to enjoy life together there with nearby family members that include three daughters, their husbands, and eleven grandchildren.