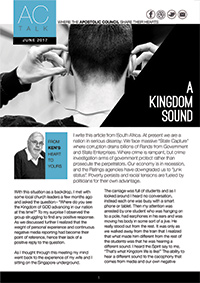 I write this article from South Africa. At present we are a nation in serious disarray. We face massive “State Capture” where corruption drains billions of Rands from Government and State Enterprises. Where crime is rampant, but crime investigation arms of government protect rather than prosecute the perpetrators. Our economy is in recession, and the Ratings agencies have downgraded us to “junk status”. Poverty persists and racial tensions are fueled by politicians for their own advantage.

With this situation as a backdrop, I met with some local church leaders a few months ago and asked the question:- “Where do you see the Kingdom of GOD advancing in our nation at this time?” To my surprise I observed the group struggling to find any positive response. As we discussed further I realized that the weight of personal experience and continuous negative media reporting had become their point of reference, hence their lack of a positive reply to the question.