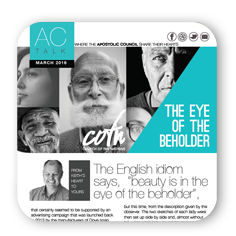 The English idiom says, “beauty is in the eye of the beholder”,

that certainly seemed to be supported by an advertising campaign that was launched back in 2013 by the manufacturers of Dove soap.

In this campaign, several women were invited to describe themselves to a forensic artist, who proceeded to sketch them. The artist sat with his back to each lady so he could not see their physical features and relied simply on
their response to questions he posed to them about their physical features. When he had finished doing so, the “subject” was replaced by someone from the public who had been tasked with observing her over a short period of time. Again, the artist sat with his back to the person doing the describing and proceeded to sketch the same ”subject”, but this time, from the description given by the observer.